The Baths of Diocletian are a unique monumental complex because of their size and exceptional state of preservation. They were constructed in a period of only eight years, between 298 and 306 AD, and extend over an area of 13 hectares, in the area between the Viminal and Quirinal Hills. The complex was able to accommodate up to 3,000 people at one time and was constructed according to the usual model used for the great imperial baths, with the principal rooms of the bathing ritual distributed along a central axis. The caldarium, the hot chamber heated using a complex system of air ducts beneath the floors and around the walls, led to the tepidarium, a chamber with an intermediate temperature, and then to the frigidarium, the vast chamber for cold bathing, recognisable today in the Basilica of Santa Maria degli Angeli. There was also the natatio, a vast open-air swimming pool measuring 4,000 square metres and embellished with a majestic monumental façade, two enormous gymnasiums arranged symmetrically to the sides of the central building, and a series of large halls with various functions. The most famous of these is the Aula Ottagona (Octagonal Hall), also known as the Planetarium because of its use in the 20th century, when its majestic umbrella dome was employed as a background against which the celestial vault was reproduced. The construction of the Baths was commissioned by the emperor Maximian, who dedicated them to his co-emperor Diocletian. This was the last great act of imperial propaganda: as the inscription originally affixed to the entrance notes, the emperor created a work of such magnificence to give it to his people. The complex remained in operation until the mid-6th century, when the Gothic War between the Eastern Roman Empire during the reign of Emperor Justinian I and the Ostrogothic Kingdom of Italy caused major damage to the city and its aqueducts, disrupting the water supply. The Baths were abandoned for approximately 1,000 years until 1561, when Pope Pius IV ordered the construction of a church and a charterhouse on the site of the ancient baths, entrusting the project to Michelangelo. The church was dedicated to Our Lady of Angels and Christian Martyrs, in remembrance of the many Christians who were believed to have died in the construction of the Baths. Michelangelo designed the church by transforming the tepidarium, frigidarium and part of the natatio, while the rooms of the Charterhouse, and in particular the main cloister containing the rooms of the monks and the small cloister, occupy the northern section of the bath complex. From 1575, starting under Pope Gregory XIII, some of the remaining halls of the Baths were transformed into the grain stores of the Pontifical Food Administration and into oil stores. 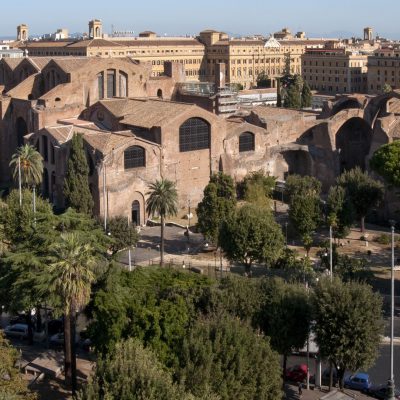 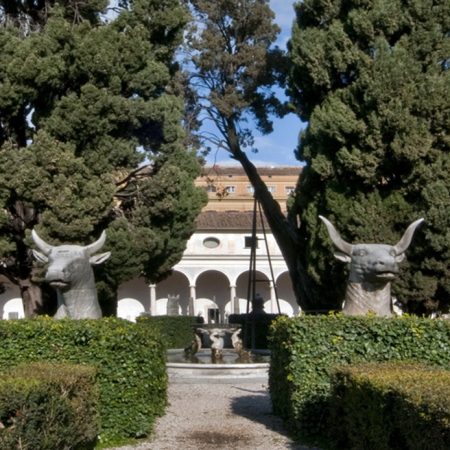 The Museum of Written Communication in the Roman World 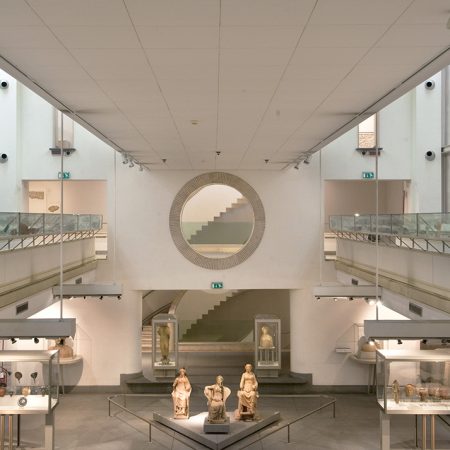 The Museum of the Protohistory of the Latin Peoples 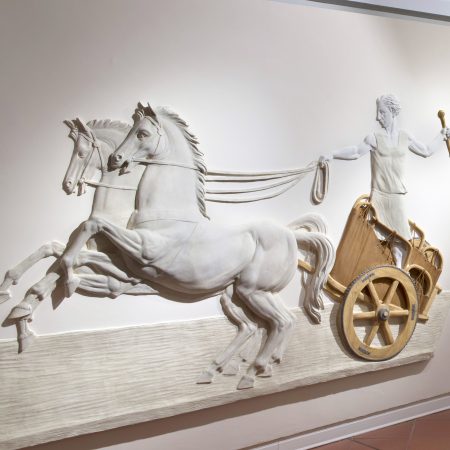 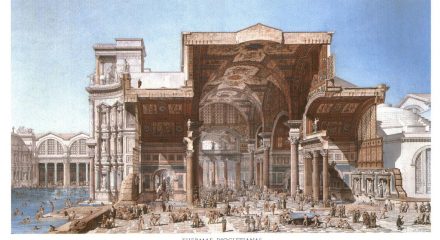 A day at the Baths

How did a Roman spend his day at the Baths of Diocletian?
First of all, he crossed the magnificent gardens adorned with statues and precious works of art. The current 16th-century garden may help to give us an idea, although the items currently displayed are predominantly funerary articles. 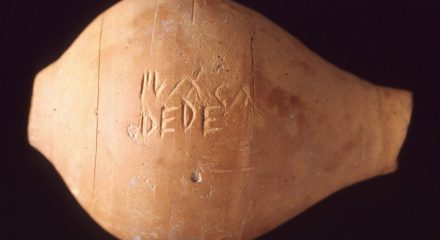 Sign and word: the birth and development of writing in the Roman world

Rooms 2 and 3 of the Museum of Written Communication in the Roman World make it possible to explore five centuries of history in just a few short steps, from the foundation of Rome in the 8th century BC to the period of its expansion in the 3rd and 2nd centuries BC.