In a bull of 27 July 1561, Pope Pius IV ordered the transformation of the Baths of Diocletian into the Church and Charterhouse of Santa Maria degli Angeli. The work was entrusted to Michelangelo, then 86 years old, who completed the Church, and probably suggested the general layout of the Charterhouse and the design of the large cloister. The construction was interrupted several times because of shortages of funds and continued throughout the 17th century and beyond. The Charterhouse was designed in accordance with monastic rules, and contained an area intended for communal living, with the small cloister, refectory and chapterhouse, and an area for seclusion, with the monks’ cells around the large cloister and with the central section left green.

The Charterhouse was abandoned in 1884 and part of the space used to accommodate the Margherita of Savoy Hospice for the Blind in Poverty, while other areas of the Baths were taken over by workshops, storehouses and taverns. In 1908, the Baths were chosen as the site for the Great Archaeological Exhibition as part of the Universal Exposition to celebrate the fiftieth anniversary of the Unification of Italy. On that occasion, the plan for archaeological recovery of the Roman structures resulted in the demolition of most of the spaces in the Charterhouse. 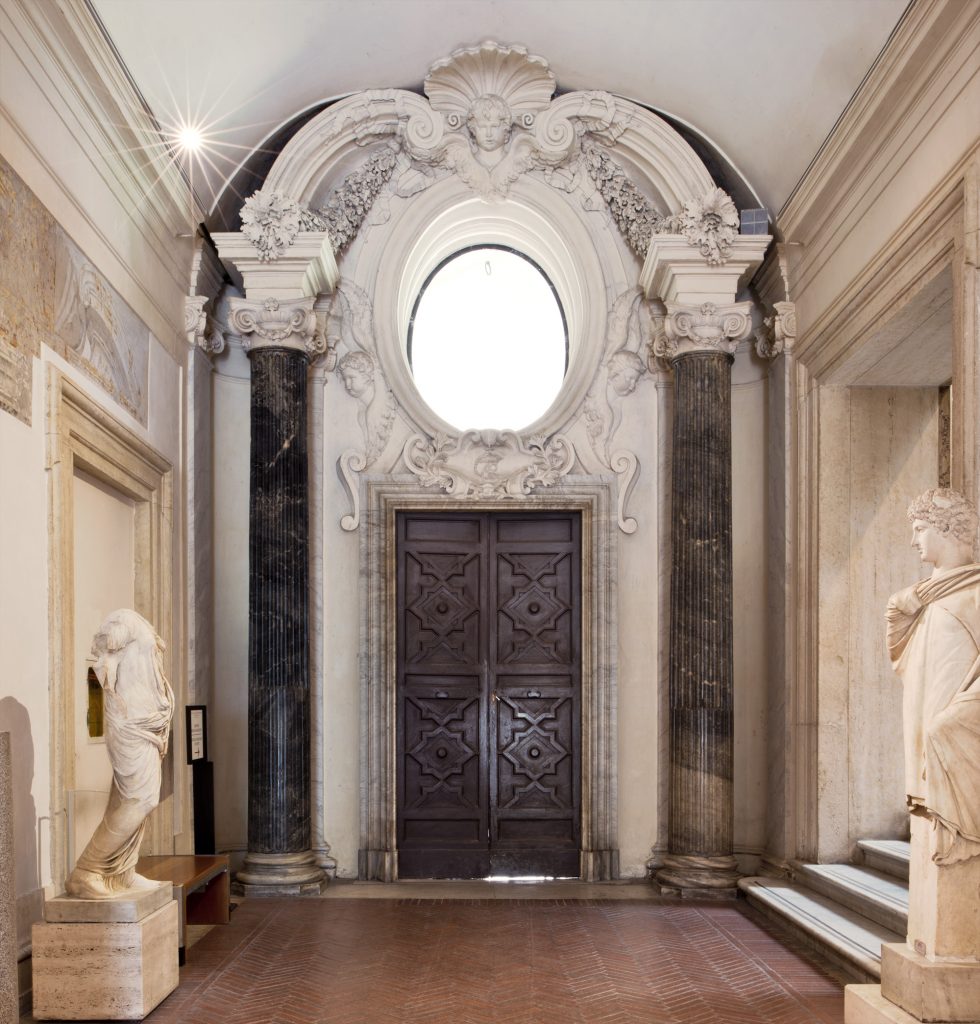 2 / 3
Fresco of Charity, pictures of the Charterhouse in the Entrance Hall of the Museum Baths of Diocletian

With its surface area of 10,000 m2, distributed over four 100 m wings punctuated by 100 solid travertine columns, the Michelangelo Cloister is one of the largest in Italy. As is recorded by the date inscribed on the first corner pillar, the construction of the cloister, probably based on designs by Michelangelo, began in 1565, one year after the death of the artist. However, the upper floor was only completed in 1676. Numerous statues, steles and sarcophagi are arranged along the four wings of the Cloister and in the garden. In the centre of the garden there are seven colossal animal heads found in 1586 in the area around Trajan’s Column. The ornate fountain with its dolphins surrounded by four cypresses dates from 1695, and one of the cypresses, supported by an iron structure, is the centuries-old ‘cypress of Michelangelo’.

An extraordinary feature near the entrance to the Cloister is the trompe-l’oeil door by Filippo Balbi (1885), through which a figure appears to look out. This represents the Carthusian monk Fercoldo, the father of Pope Clement IV, who is depicted surrounded by objects from the daily life of the monks in the Charterhouse.

The cloister was constructed in a space occupying around a third of the natatio, the swimming pool in the Baths. In the centre of the internal court there is a circular three-tiered well, constructed from reused or reworked travertine pieces. A fresco depicting the “Pietà degli Angeli” was recently discovered above the door that once connected the two cloisters: Christ supported by angels with Pope Pius IV at right and Saint Bruno, the founder of the Carthusian Order, at left.

Numerous sculptures are displayed along the arches, supported by pillars, along with some of the main documents of the Roman Catholic religion.

The cloister is also known as the Ludovisi Cloister, from the name of the famous marbles from the Boncompagni-Ludovisi Collection that were housed here until they were moved to the Palazzo Altemps in 1997.